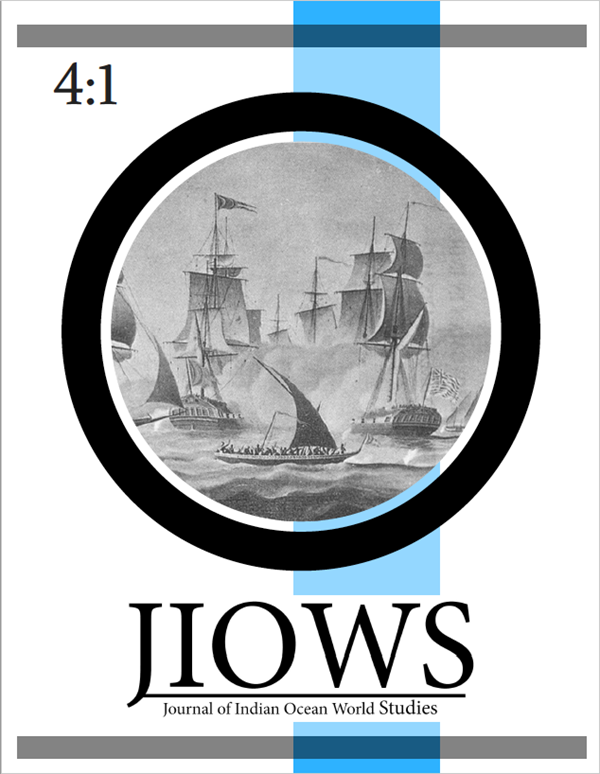 The emergence of maritime piracy in the western Indian Ocean captured global attention from 2007 to 2012, resulting in simplistic and racialized representations of piracy in news and other media. In 2011, two diasporic Somali writers published literary works intervening in this representation: Nuruddin Farah’s novel Crossbones and Ubax Cristina Ali Farah’s essay “Un sambuco attraversa il mare” [“A dhow is crossing the sea”]. This essay reads Farah and Ali Farah’s alternative narratives of piracy through the Somali phrase burcad badeed, which both translate as ‘sea bandits’ or ‘pirates.’ As a method burcad badeed first historicizes contemporary piracy within the longue durée of the Indian Ocean world. Second, it draws on the ocean as an analogy and aggregator of dispersed forms of knowledge, thereby inviting comparative reading across conventional boundaries of generation, language, and form, and making visible practices of collective, embodied, and polyvocal knowledge production. Finally, burcad badeed complicates the distinctions between land and sea which undergird legal definitions of piracy to focalize particular landscapes: Namely the beach and the relationship between coast and hinterland. The beach foregrounds the ecological devastation to which piracy is a response, while the relationship between coast and hinterland frames practices of movement, complex racializations, and senses of belonging in Somalia and on the east African coast.

Issue
Vol. 4 No. 1 (2020)
Section
Articles
Authors retain copyright and grant the journal right of first publication with the work simultaneously licensed under a Creative Commons License CC BY NC SA, which permits users to share, use, and remix the material provide they give proper attribution, the use is non-commerical, and any remixes/transformations of the work are shared under the same license as the orignal.